“This book is a fascinating read with a new approach to the history of New Mexico. The information it provides reflects both Patorni’s scholarship and his enthusiasm. This is a well-written, well documented, and unique take on New Mexican history.”

While it’s fairly common knowledge that people with French surnames trapped and traded in New Mexico during the mountain man era, The French In New Mexico indentifies many other French connections in the American Southwest. In fact, Francois-Marie Patorni points out that Franciscan priest Marco de Nice—the man whose report of cities of gold prompted the Spanish incursion into what is today the American Southwest—was French. He may have been in New Spain and subject to the Spanish church there, but he was born in Nice.

This is where The French in New Mexico begins. But it doesn’t end there. Patorni walks his reader through four centuries of New Mexico history, establishing links to France every step of the way.  Patorni covers major figures as well as minor ones and groups his material in easily accessible headings, by topic (wine growing, the church, merchants, etc.) as well as location (Santa Fe, Mora, the lower Pecos, etc.). This makes the book great for both a comprehensive overview of events in New Mexico from a French perspective as well as for locating material about a particular topic or location.

This book is a fascinating read with a new approach to the history of New Mexico. The information it provides reflects both Patorni’s scholarship and his enthusiasm. This is a well-written, well documented, and unique take on New Mexican history. If you’re interested in New Mexico’s history and/or the contribution of the French people to the American Southwest, I recommend The French In New Mexico.

Excerpts from the review:

The decision to anchor the book’s down-to-earth, admirably dispassionate style with a suite of backmatter worthy of an aspiring Ph.D. in history […] renders this end-product of very personal quest all the more admirable, guaranteeing extended shelf life […] he has set a high bar for other investigators whose particular interest offers similar potential for expanding the horizon of current knowledge and modifying the angle from which we view regional as well as national history. He is to be commended for corralling so many disparate bits of information between the covers of the intriguing, durable, generously illustrated volume. 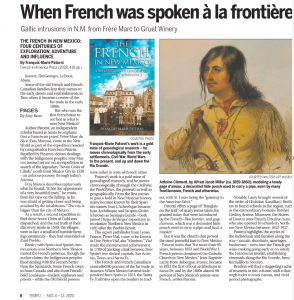 The 411-page book is very well researched and written. It contains a 17-page Index, an extensive 14-page bibliography, 57 pages of endnotes, numerous illustrations, and dozens of first-time-ever-in-print photographs.

The story starts with the Spanish ‘invasion’ of what would become the American Southwest, featuring the early Spanish conquistadors, fortune-seekers, and friars making their marks on the native cultures and environment. Gradually, French explorers and traders entered the area, especially in what would become Texas, sometimes competing with the Spanish but more often exploring, trading, and settling in areas free of Spanish influence.

From the 1500s through the mid-1700s, as the Spanish in Mexico expanded their influence into the American Southwest, their relationship with the French settlers and traders sometimes was peaceful while other times more violent depending on the relationship between their respective mother countries to one another and at other times depending on local personalities, ambitions, and circumstances. In the 1760s, the Spanish Crown hired two Frenchmen to oversee development and activity in what is now New Mexico. Their influence was immense. For instance, during this period, these Frenchmen promoted the search for travel routes to and trade with United States towns along the Mississippi River. By the end of the 1700s, conditions in other parts of the Americas that were settled by the French caused many to flee such lands as Haiti for other parts of the Americas. Texas and New Mexico benefitted from their migration.

In the early 1800s, larger numbers of French fur traders ventured into the Southwest, usually by-passing the buffalo in favor of much smaller animal hides and furs such as the beaver. Beginning in the second and third decades of the 1800s, unrest in several Canadian provinces between the British and French populations over political and economic treatment lead to several prosperous and even more not-so-prosperous French families fleeing Canada into the American interior, down the earliest sections of what became the Santa Fe Trail, into northern New Mexico. Many of these immediately set up businesses, first in and around Las Vegas, NM, and gradually further west along the newly-built Atchison, Topeka, and Santa Fe Railway, and soon afterwards southward into the central part of the Territory. The story is carried through to the end of 2020, although the heaviest ‘history’ carries the story to the end of the 1900s.

Examples of key French families discussed include the Abréu, St. Vrain, Blanchard, Desmarais, Beaubien, and LaRue families. Not to be overlooked is the French connection to Lucien Bonaparte Maxwell and his extended mixed-culture family. Also examined are the migrations into and influence of French settlers in such towns as Socorro, Las Vegas, Mora, Santa Fe, Las Cruces, and Albuquerque as well as in numerous Pueblo and Native-American communities. Who can overlook the contributions of the Lamys, especially Archbishop/Bishop Lamy, who, within fifteen years after taking charge of the Catholic Church in the Territory, built eighty new churches and repaired well over two dozen others, many of which had been built by the early Spaniards or later Mexican settlers and missionaries. Not to be overlooked, he details the establishment and construction of a number of well-known New Mexico buildings, such as the famous Loretto Chapel next to the plaza in Santa Fe and Our Lady of Sorrows one block from Las Vegas’s old town plaza. Also mentioned is the participation of the French in the Civil War Battle of Glorieta Pass, the Lincoln County War, the Spanish-American War, the cattle wars, and important conflicts and agreements with several Indian peoples. After the early 1600s the French contributed in some meaningful ways to every area of New Mexico history, politics, economy, religious institutions, and culture. What comes through during the story told here is that, in nearly all instances, there was harmony and integration among the French and French-Swiss and the Anglo-Americans, Spanish, Mexican-Americans, and Native American peoples.

What I found in my studies of New Mexico history and cultures was the emphasis on the movement, settlement, interactions, and contributions of the original native peoples, the Spanish, the Mexicans, and the Anglo-Americans as though these were the only peoples and cultures that made substantial contributions to the history and development of the Southwest. That is a seriously flawed and narrow view of this history. The author touches on the interactions among the different cultures in New Mexico to one another and highlights with biographical sketches the lives, activities, and contributions of French-descendent men, women, and families who first settled and then lived in New Mexico over the centuries from the 1600s to the present. The story told here continually integrates the activities and contributions of the French with those of the other peoples and cultures. At other times, it focuses on specific French men or women who left their respective stamps on New Mexican economic activity, culture, arts, politics, and everyday life. This history makes a strong case that French men and women for over four hundred years made significant and lasting impacts on what was then and what became New Mexico. This detailed narrative makes more complete any effort to construct an accurate history of the Southwest, especially of New Mexico. As the reader by now has detected, I strongly endorse this book for everyone who desires the most comprehensive multicultural history of New Mexico and the Southwest.