Many Santa Feans know about our five French Archbishops in the 1800’s and early 1900’s. But fewer are aware that New Mexico’s history with French immigrants is much richer, and reaches back to the 16th century.

Talk by F.M. Patorni, January 13, 2016, in Santa Fe at the Palace of the Governors
http://media.museumofnewmexico.org/audio/chavezlibrary/FrancoisPatorni.m4v
This year (2016), F.M. Patorni is the first speaker in the New Mexico History Museum’s brown bag lecture series. KSFR reporter and lifelong Francophile Kate Powell caught up with Francois-Marie about the surprising impact of French immigrants in the Southwest, and about the book he’s writing on the subject.

Saving the La Belle, one of the ships bringing the first settlers to New Mexico. Watch the enthralling video. https://www.thestoryoftexas.com/la-belle/the-exhibit 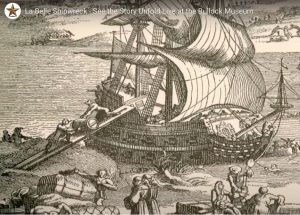 At the end of 1699, Jacques Grolet, now going by the name Santiago Gurulé, appeared at age thirty-six for hearings relative to his proposed marriage to nineteen-year-old Elena Gallegos. Witnesses to the wedding included his companions Jean L’Archevêque and Pierre Meusnier. The three Frenchmen were survivors of the ill-fated La Salle expedition to Texas. Santiago and Elena lived in Bernalillo, a settlement between Santa Fe and Albuquerque. Hundreds of people now bear the Gurulé name, as revealed in detail in the family’s website created and managed by Angela Lewis, http://www.gurulefamily.org/

Several places are named in José Navarro’s honor: a Texas County, Navarro Street, and numerous public schools. The Navarro county seat, Corsicana, is named in honor of Navarro’s Corsican-born father. José Antonio Navarro and his father are heroes honored to this day in Corsica.

The French-Swiss settlement in the Lower Pecos
“A l’ouest du Pecos”
In French
https://www.rts.ch/play/tv/climage/video/a-louest-du-pecos?id=6473032

A MEDLEY OF VIDEOS:

Prairie Hollow Productions is producing a series of videos about the Santa Fe Trail.  Each video is about three-minutes long and you can find them HERE
Rocky Mountain PBS has a 28 minute segment about Bent’s Old Fort. This video is available by clicking here.
The National Park Service features many of our national historic sites and trails. Some are only seconds long, others run just a few minutes. Click HERE for videos.
Videos about the Santa Fe Trail, click here. You can watch ordinary folks touring the Trail by motorcycle, bicycle, horse, and foot. Some of videos have wrong information socaveat emptor!
National Historic Sites and Monuments along the Trail have videos and photo galleries of each site. For example, go to the Fort Larned National Historic Site website (click here).
Fort Union National Historic Monument (click here) shows several videos including one shot in the 1920’s showing what the site looked like 100 years ago. 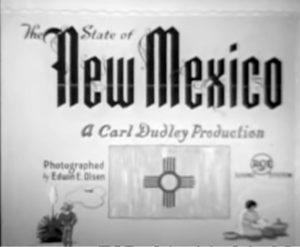 THE MOVIE! A 1940 movie starring Ronald Reagan, Error Flynn, and Olivia De HavillandLast. Historically-inaccurate but fun movie ever made about the Santa Fe Trail, go to YouTube (click here). 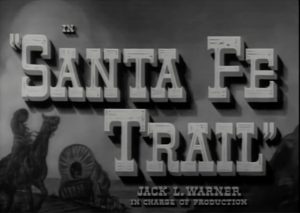